While I was hunting poor insects in order to take some photos of them my younger son appeared from nowhere and all of a sudden his head was found in front of my camera. He really made me laughing. My sons use to teasing me every time they see me with my camera. They say: “Look at mom, she torment poor bees again”, or “Hey mom, this flower you haven’t photographed yet”.
I love this photo and I want to share it with you.

Some of my blogging friends asked me what kind of pines is there on the photo that I posted on last Friday. I am sorry but I really don’t know. I tried to find out but nobody knew. I even didn’t find anything on the internet. 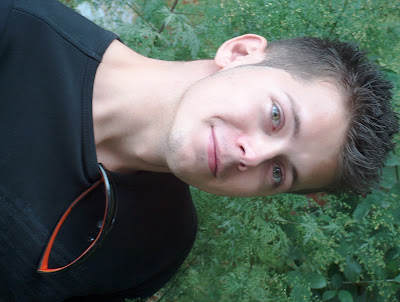 I am late with my comments to your posts my dear blogging friends. I would like to apologise to you all this way. I haven’t been able to find enough time for myself lately. I’ll catch up with your posts as soon as I can. Thank you very much to all of you who find the time to visit my blog and for your always beautiful and kind comments.
Have a wonderful weekend!
Posted by MedaM at 3:01 PM

Hi and happy friday...
Your son is a handsome young man :)

I think I have found the particular pine/spruce tree in your pictures...


It grows throughout northeast Europe from Norway and Poland eastward, and also in the mountains of central Europe, southwest to the western end of the Alps, and southeast in the Carpathians and Balkans to the extreme north of Greece. The northern limit is in the arctic, just north of 70°N in Norway. Its eastern limit in Russia is hard to define, due to extensive hybridisation and intergradation with the Siberian Spruce (Picea obovata), but is usually given as the Ural Mountains. However, trees showing some Siberian Spruce characters extend as far west as much of northern Finland, with a few records in northeast Norway. The hybrid is known as Picea x fennica. World map showing Europe Political map Europe is one of the seven continents of Earth which, in this case, is more a cultural and political distinction than a physiographic one, leading to various perspectives about Europes borders. ... Mount McKinley (Denali) in Alaska (USA) has the largest visible base-to-summit elevation difference on Earth. ... The West face of the Petit Dru above the Chamonix valley near the Mer de Glace. ... Satellite image of the Carpathians Souvenir from Carpathian region (Poland) The Carpathian Mountains are the eastern wing of the great Central Mountain System of Europe, curving 1500 km (~900 miles) along the borders of Austria, the Czech Republic, Slovakia, Poland, Ukraine, Romania, Serbia, Montenegro and northern Hungary. ... To meet Wikipedias quality standards, this article or section may require cleanup. ... The red line indicates the 10Â°C isotherm in July, commonly used to define the Arctic region border The Arctic is the area around the Earths North Pole. ... In biology, hybrid has three meanings. ... Binomial name Picea obovata Ledeb. ... Map of Ural Mountains The Ural Mountains (Russian: Ð£Ñ€Ð°Ð»ÑŒÑÐºÐ¸Ðµ Ð³Ð¾Ñ€Ñ‹ = Ð£Ñ€Ð°Ð») also known simply as the Urals and as the Riphean Mountains in Greco-Roman antiquity, is a mountain range that runs roughly north and south through western Russia. ...


Norway Spruce shoots are orange-brown and glabrous (hairless). The leaves are needle-like, 12-24 mm long, quadrangular in cross-section (not flattened), and dark green on all four sides with inconspicuous stomatal lines. The cones are 9-17 cm long (the longest of any spruce), and have triangular-pointed scale tips. They are green or reddish, maturing brown 5-7 months after pollination. The seeds are black, 4-5 mm long, with a pale brown 15 mm wing. The tallest measured tree, 63 m tall, is in Perucica Virgin Forest, Sutjeska National Park, Bosnia-Herzegovina. The leaves of a Beech tree A leaf with laminar structure and pinnate venation In botany, a leaf is an above-ground plant organ specialized for photosynthesis. ... This is not about surgically created bowel openings; see stoma (medicine) In botany, a stoma (also stomate; plural stomata) is a tiny opening or pore, found mostly on the undersurface of a plant leaf, and used for gas exchange. ... A cone (in formal botanical usage: strobilus, plural strobili) is an organ on plants in the division Pinophyta (conifers) that contains the reproductive structures. ... Species About 35; see text. ... A ripe red jalapeno cut open to show the seeds For other uses, see Seed (disambiguation). ...


Populations in southeast Europe tend to have on average longer cones with more pointed scales; these are sometimes distinguished as Picea abies var. acuminata, but there is extensive overlap in variation with trees from other parts of the range.


Some botanists treat Siberian Spruce as a subspecies of Norway Spruce, though in their typical forms, they are very distinct, the Siberian Spruce having cones only 5-10 cm long, with smoothly rounded scales, and pubescent (hairy) shoots. Binomial name Picea obovata Ledeb. ...


Another spruce with smoothly rounded cone scales and hairy shoots occurs rarely in the central Alps in eastern Switzerland. It is also distinct in having thicker, blue-green leaves. Many texts treat this as a variant of Norway Spruce, but it is as distinct as many other spruces, and appears to be more closely related to Siberian Spruce, Schrenk's Spruce (P. schrenkiana) from central Asia and Morinda Spruce (P. smithiana) in the Himalaya. Treated as a distinct species, it takes the name Alpine Spruce (Picea alpestris). As with Siberian Spruce, it hybridises extensively with Norway Spruce; pure specimens are rare.

Hi Medam! Here I am on my weekly visit! And this week we have again some beautiful pictures around, and an amazing surprise picture... ;) Wish you a great weekend!
Blogtrotter, now waiting for your comments «Deep in Crete»!
Gil

Generally spontaneous photos are very lively: in fact this picture has really turned out quite well.
A great Sunday to you too!

He is a charming young man! I bet he takes after you :D

Thanks for visiting Norwich Daily Photo and leaving your comments. Sorry for not visiting for a while. Imagine not having the Internet in the 21st century. But it's sorted - for now. Happy weekend!

joy
A Pinay In England
Your Love Coach
I, Woman

What a handsome son you have. He has absolutely gorgeous eyes. I love the spontaneous nature of the shot.
Blog when you can. You need time for yourself and family. They always come first before blogging.
Enjoy your weekend.

This really made me smile, your words too and what your sons say to you about you and your camera. Your son is great looking! And most importantly, it looks like you have a good, fun time together.

Thank you medam for your visit. A very spontanous photo shot which are in my view always the best. You have a very handsome son and cheeky in a nice way. Have a nice sunday.

Hehehe... it made me laugh to see this as well. That was perfect timing! I am glad you posted this. Yes, he is a handsome young man.

Thank you for dropping by and giving me much needed encouragement during my accident in the last couple weeks. It really meant much to me. Soon I will be able to blog again.
{Hugs}
~Michele~

Your son is very handsome!
--JB

Incredible shot ) and you have a very nice and handsome son! Love his hairdo )

Medam, lol, this is cool shot. You have really nice son. Yeah about blogging, it is good to take some time off, like me especially, I went from few posts a week to one post a month, but I guess Matthew is so precious, I rather be with him, however, sometimes he lets me blog, but I can only read, as he pounds on the keyboard, lol. Great caputre again, Anna :)

a gorgeous looking kid! and I find some resemblances with ours: the same smile :).

What a handsome son you have!