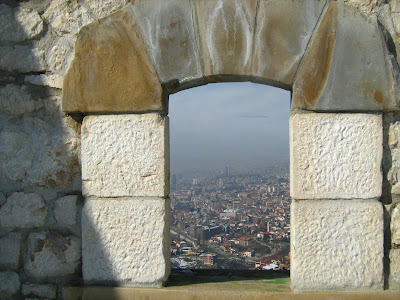 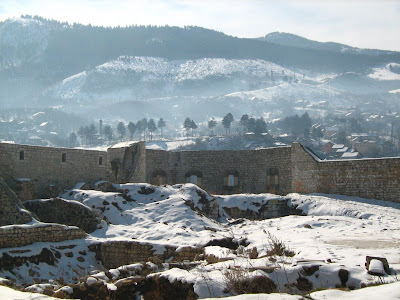 Bijela tabija, in English the White fort is an old fort overlooking the historic core of Sarajevo. It is a national monument of Bosnia and Herzegovina. It is supposed that it was built at the site of a medieval fortress, built around 1550 year. The upper part of Fort, built of the big stone blocks, was set in the Austro-Hungarian period.
Posted by MedaM at 12:59 PM

Such a wonderful view of your area. I can only imagine what it was like during the height of its prominence. My grandmother was born in a little village somewhere in the Austro-Hungarian empire. She came to America as a young girl.

The door would have been great for last week's Thursday Challenge. The theme was "door."

like both of these shots...of course the door shot is fab...always like framing shots.
have a good day and weekend.

Very nice duet of shots for this fortress

This is a very majestic fort. I love the door frame composition. Thanks for showing us a wonderful view of your city.

Hi and good morning, thank you for your kind comment. I think you do very well! I love your photography, it has soul. The pictures of your ancient city are very special. I wish I could go there but there seems never enough time when I am in Europe and I am not that often there.

Both wonderful and interesting photos, Medam. The second landscape of the Fort with the snow is so attractive.
This Fort reminds me of the Exilles Fort here in Piedmont, about which in future I'll make a post.

a perfect view! my friend Novala in Vienna (a huge Balkan fan) discovered finally your blog! I am so glad for this!

Oh this is lovely... I just adore the view through the archway... that's fantastic!